Welcome!
This listing will include any crewmembers wanting to have there personal contact info made available to those who would like to reach out and re-connect.
If you would like your contact information to be included here please send it to our Webmaster.
Please use the 'Contact Form' button below to send your information.
Your entries will be added as they are received. This listing was started 5-4-2021 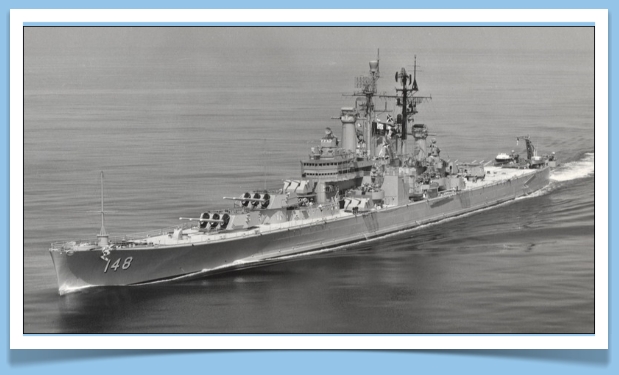 Russell Johnson - GMG2 - Weapons Dpt. 5th. Div. Mt.53 then Mts. 51, 52, 53. Then T-1 | September 1st. 1968 - December 24th1972
I arrived aboard as a Firemen Apprentice and was told that the Engineering Dpt. was full so I had choice between Deck gang or Gun gang. The ship was in the shipyard and I was working in Mt.53 and I saw guys covered in soot with pales of bricks walking by and asked the Mt. Captain what they were doing and when I found out that they were haling boiler bricks I asked how I could become a Seamen Apprentice he told me to fill out a chit. I made 2nd. Class some time in 1972 and became responsible for maintenance of Mts. 51, 52, & 53 and not long after that Gunner Smith asked me if I would like to become Turret Captain of T-1 and I said yes. Newport News was the best ship I was ever on. I left the Navy in 1980 as a GMGC. Email: garplool1@aol.com

John L Hofmann - OS2(SW) Served onboard The USS Newport News CA-148 From July 1970 till July 1974. Was assigned to 4th Division after Mess Cooking till I went to PN A School.Then assigned to Personnel Office from 72 till 74 left as a PN3. email: ultratrike16@gmail.com

William Kosakowski - email: bill1111@optonline.net - Served aboard the USS Newport News 55/56 as a Radioman. Came aboard as a RMSN, left as an RM2 for shore duty at sub base New London, Conn.

Richard J Myers - Served onboard from March 1967 ‘til August 30, 1968 in the CR Division...Initially went aboard assigned to ComSecondFlt...transferred to ships company just prior to departure on first WestPac Cruise.
Email: myers5star@yahoo.com

Stuart Edinger -  I was onboard the News from 1967 to 1970, originally OR division but then they changed it to CR (communications radio) division, I came onboard as an RMSA out of RM "A" school (Bainbridge Md.) and attained the rate of RM2 before being honorably discharged August 1970.
email: stuedinger@aol.com
Address: 6 Lisa Court, Parlin NJ

Louis J. fricano - 7th Division. I left the NN at the end of 1960
email: fricanolouisj@gmail.com

Gary Strine(Boats) BM3 - Arrived on board during dry dock in Portsmouth March 1970. Assigned to 7th Div. after initiation in the scullery, where I stayed until discharge Secretary r 1973. Duties were chipping, painting, holy stoning etc.. Assigned to Officers boat coxswain then Captains Gig Coxswain and Honors BM. Serving on “Thunder” was an honor with the “best crew”! email: gestrinesr@gmail.com

Willam (Bill) Walker - SN and then YN3. Side cleaners. Did ship/deck maintenance and then became admin for Chief BOSN (his maindeck office) and then Weapons Office, below deck. I was on the NN from Aug 1968 to Jun/jul 1969. Reported aboard when NN was in dry dock, in Newport News, VA. Was on 2nd westpac tour. Next assignment was COMSERVLANT. email: Popvilla@gmail.com

Dennis J Records - BM3 - I came on board May 70 high lined off ship June 72, served 1st, 3rd, Honor BM, 7th. Living in Winter haven FL, having retired as a Contract Transportation Specialist for the US Postal Service
email: micdenrecords@aol.com

Dom Bottone - BM3, 7th division. Came aboard December '71. Spent time as mess cook, then assigned to 7th division deck crew. Also assigned to Captains Gig as seaman and later coxswain. Crewed with some of the finest sailors during my 4 years aboard Thunder. Was part of the decommissioning crew until my discharge in '75
email: dbottone53@gmail.com

Thomas Drummond jr - DM3 (Draftsman) 1962-1963 - I was in 4th Div. Deck Dept.. I made DM3 (Draftsman) a rate I don't think they have anymore. I was transferred off to the USS Sierra. I am now an Architect in Ca. With my own firm. email: tomdrummondarch@sbcglobal.net

Vinny Montemurro (Monte) - IC3 - E Division. email: vinnymonte@q.com - I was stationed on the Newport News from Nov '73 (After Nato cruise) until Jan '74 when I started Nuke school. I was IC3. I was on board for cruise to Puerto Rico in late '73. Those who knew me knew me as Monte. I live in Casa Grande Az.

Samuel Townsend (Sam) - email: samueltownsend@yahoo.com - On board from Sept 68 thru July of 70. Started as mess cook, advance to fireman. Went into A Div. Made EN3 and EN2 while on broad. Was a member of hydraulic gang and then care taker of ships small boats and was regularly assigned as engineer on Captains GIG . Got transferred to DD864 in July of 70.

Bill Parker - B-Division - BT2 - I served with Charlie McCoy, Robert Rhoades, Bob Morton, Jimmy Oakley, John Mountjoy Dennis Wolfenburger, and I might add the Newport News was the Greatest ship I served on. There are many more shipmates I served with some have passed away and some I can’t reach if you are out there please contact me, all who has served on her I consider my shipmate.
Email: wparker452002@yahoo.com - Ph: 856-848-5701 - Address: 418 Warwick RD Deptford, NJ 08096

Jack Wingate - USS NEWPORT NEWS CA-148
On board 1968-1970 FOX Division FTG3
Worked in After Secondary Plot. Where the TV was located.
email: jackwingate3226@att.net

Dennis Showman - I served in Fox Division as a Radar operator on Sky IV director. From early 1972 when I earned my FTG3 rating until 2/19/74. I was in Sky IV but earlier I had worked in all the other Sky I, Sky II and Sky III gun directors. email: dshowman@yahoo.com
I now reside near Phoenix, Arizona.

Edward M. Aubin - 7th & Fox Division - FTG-3 -  October 1968 – May 1972 - Thunder was a great ship with a great crew. I left the ship in Subic Bay on May 9th 1972 after four years aboard on an hours notice. Never got to say goodbye to many friends & shipmates. Hope everyone uses this forum to keep in touch. Hope to see everyone at the next reunion. Email: Eaubinsr@comcast.net Address: 266 Biscayne St. Bloomingdale, IL 60108

Danny Raburn - Marine Detachment from 1971 till 1973 including 72 Vietnam Deployment. Looking for other Marines that were in the Detachment during that period. Email me at: dannyraburn@hotmail.com

Dan Hooper (Dan Keyes) - 5th division & H division - SN - I started out in 5th div, was there when T2 exploded, I became a corpman striker and moved to H div. Upon return from Nam, I went to Corpsman school and Psych School finished my service at Bethesda Naval Hospital serv in those in need. I remember Fred, Terry,Lou,Diaz,Kav,McCaulley,Pinky,O'keefe,Apple,Hill,Cox, Chief Hines,Zender,Siegle,Hawley,Doc Fulchiero...and many more.. I am on page 86 in the 72 West pac book. Many memories. email: dmhoop@comcast.net Ph: (240) 993-6351
address: 12375 Aden Rd, Nokesville VA. 20181

Tom Lane - I served aboard Newport News during the 3rd WestPac cruise ('72 through '73) I started out in a deck division but quickly moved to Operations Department about half way through my time aboard. My best friends were (and still are!) Frank Calabrese, Kurt Biggers and Ed Rossi.
My home address is:
474 North Center Drive, Apartment 2A
Grand Rapids, Michigan, 49544
PH: 616-516-2418
email: kc8tby@hotmail.com

John Hanson - O/I Division - RD3 Later RD2 - Of the 3 ships I was on, the Newport News was by far the best. email: hanson62@comcast.net

George Sedares - OI Div - RD3 - In contact with two close div. shipmates and a great ET in MI. I have a few hundred nice slides from 60 Med cruise available to share on the net. email: gts31bumbee@aol.com Address: 285 PLANTATION ST # 101

Thomas Beyster - On board 11-65 to 6-68 was in 4th division for about 5 months transfer to S1 was outside Storekeeper while in port was assigned to the paint locker at sea transferred off as a SK 3.

Kathy Zendner - I am the Wife of Shipmate Chuck Zendner. I'm a US Navy veteran and Hospital Corpsman.
I'm also a "Life Member", of Vietnam Veterans of America.
I love supporting "Thunder"! I was involved with the Sept. 2002 work party. I cleaned in T2 for two days!

Most of you are aware that the 'old' crew listing has been down for some time now and has yet to be fixed, if in fact it could ever be fixed. The database file structure is not functioning as it should and is corrupt. Therefore, our webmaster has taken on the task of re-building a list of crewmembers who are active on the internet and would like to re-connect with other crewmembers.
**Also, be sure your contact info is up to date for the USS Newport News mailing list

If you appreciate all that I do in my efforts to 'Keep The Memories Alive' click the button below and buy me a cup or two of coffee (hint). Thank you in advance!

This website is 'Responsive' and best viewed with modern browsers: Chrome, Firefox, Edge, Opera - IE (Internet Explorer) is no longer supported by Microsoft
Protection: All original content on http://www.uss-newport-news.com/ is created by the website designer, including but not limited to text, design, code, images, photographs and videos are considered to be the Intellectual Property of the website owner, whether copyrighted or not, and are protected by DMCA Protection Services using the Digital Millennium Copyright Act Title 17 Chapter 512 (c)(3). Reproduction or re-publication of this content is prohibited without permission. website updated: 05-17-2021  v2.7.4
Your Webmaster