Stay in touch with your Shipmates!

Vinny Montemurro (Monte) - IC3 - E Division. email: vinnymonte@q.com - I was stationed on the Newport News from Nov '73 (After Nato cruise) until Jan '74 when I started Nuke school. I was IC3. I was on board for cruise to Puerto Rico in late '73. Those who knew me knew me as Monte. I live in Casa Grande Az.

Samuel Townsend (Sam) - email: samueltownsend@yahoo.com - On board from Sept 68 thru July of 70. Started as mess cook, advance to fireman. Went into A Div. Made EN3 and EN2 while on broad. Was a member of hydraulic gang and then care taker of ships small boats and was regularly assigned as engineer on Captains GIG . Got transferred to DD864 in July of 70.

Tom Lane - I served aboard Newport News during the 3rd WestPac cruise ('72 through '73) I started out in a deck division but quickly moved to Operations Department about half way through my time aboard. My best friends were (and still are!) Frank Calabrese, Kurt Biggers and Ed Rossi.
My home address is:
474 North Center Drive, Apartment 2A
Grand Rapids, Michigan, 49544
PH: 616-516-2418
email: kc8tby@hotmail.com

Thomas Beyster - On board 11-65 to 6-68 was in 4th division for about 5 months transfer to S1 was outside Storekeeper while in port was assigned to the paint locker at sea transferred off as a SK 3.

Welcome!
This listing will include any crewmembers wanting to have there personal contact info made available to those who would like to reach out and re-connect.
If you would like your contact information to be included here please send it to our Webmaster. Please include your:
name, years aboard NN, Div, Department, rate, email address
home address, phone number
Your entries will be added as they are received.

Jack Wingate - USS NEWPORT NEWS CA-148
On board 1968-1970 FOX Division FTG3
Worked in After Secondary Plot. Where the TV was located.
email: jackwingate3226@att.net

Dennis Showman - I served in Fox Division as a Radar operator on Sky IV director. From early 1972 when I earned my FTG3 rating until 2/19/74. I was in Sky IV but earlier I had worked in all the other Sky I, Sky II and Sky III gun directors. email: dshowman@yahoo.com
I now reside near Phoenix, Arizona.

Louis J. fricano - 7th Division. I left the NN at the end of 1960
email: fricanolouisj@gmail.com

Gary Strine(Boats) BM3 - Arrived on board during dry dock in Portsmouth March 1970. Assigned to 7th Div. after initiation in the scullery, where I stayed until discharge Secretary r 1973. Duties were chipping, painting, holy stoning etc.. Assigned to Officers boat coxswain then Captains Gig Coxswain and Honors BM. Serving on “Thunder” was an honor with the “best crew”! email: gestrinesr@gmail.com

Willam (Bill) Walker - SN and then YN3. Side cleaners. Did ship/deck maintenance and then became admin for Chief BOSN (his maindeck office) and then Weapons Office, below deck. I was on the NN from Aug 1968 to Jun/jul 1969. Reported aboard when NN was in dry dock, in Newport News, VA. Was on 2nd westpac tour. Next assignment was COMSERVLANT. email: Popvilla@gmail.com

Dennis J Records - BM3 - I came on board May 70 high lined off ship June 72, served 1st, 3rd, Honor BM, 7th. Living in Winter haven FL, having retired as a Contract Transportation Specialist for the US Postal Service
email: micdenrecords@aol.com

Dom Bottone - BM3, 7th division. Came aboard December '71. Spent time as mess cook, then assigned to 7th division deck crew. Also assigned to Captains Gig as seaman and later coxswain. Crewed with some of the finest sailors during my 4 years aboard Thunder. Was part of the decommissioning crew until my discharge in '75
email: dbottone53@gmail.com

Danny Raburn - Marine Detachment from 1971 till 1973 including 72 Vietnam Deployment. Looking for other Marines that were in the Detachment during that period. Email me at: dannyraburn@hotmail.com

William Kosakowski - email: bill1111@optonline.net - Served aboard the USS Newport News 55/56 as a Radioman. Came aboard as a RMSN, left as an RM2 for shore duty at sub base New London, Conn.

Richard J Myers - Served onboard from March 1967 ‘til August 30, 1968 in the CR Division...Initially went aboard assigned to ComSecondFlt...transferred to ships company just prior to departure on first WestPac Cruise.
Email: myers5star@yahoo.com

Stuart Edinger -  I was onboard the News from 1967 to 1970, originally OR division but then they changed it to CR (communications radio) division, I came onboard as an RMSA out of RM "A" school (Bainbridge Md.) and attained the rate of RM2 before being honorably discharged August 1970.
email: stuedinger@aol.com
Address: 6 Lisa Court, Parlin NJ

Kathy Zendner - I am the Wife of Shipmate Chuck Zendner. I'm a US Navy veteran and Hospital Corpsman.
I'm also a "Life Member", of Vietnam Veterans of America.
I love supporting "Thunder"! I was involved with the Sept. 2002 work party. I cleaned in T2 for two days!

Most of you are aware that the 'old' crew listing has been down for some time now and has yet to be fixed, if in fact it could ever be fixed as the database is not functioning as it should and is corrupt. Therefore, our webmaster has taken on the task of re-building a list of crewmembers who are active on the internet and would like to re-connect with other crewmembers.
**Also, be sure your contact info is up to date for the USS Newport News mailing list 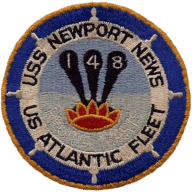